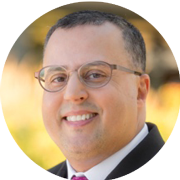 Selim earned his B.S., M.S., and Ph.D. engineering degrees from the University of Michigan, Ann Arbor. He is a Certified Information Systems Security Professional (CISSP), Senior Member of IEEE, and member of ACM and ISACA. He holds over 100 patents in various areas of computer and information security.

Selim has also been recognized for security innovation and leadership and received several awards including the 2019 CISO of the Year Award, Top 100 Global CISOs, and Most Influential CISOs.